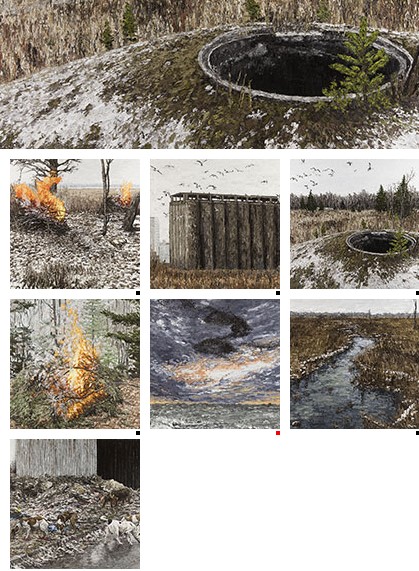 Referring to the biblical story of the Ark, Bahen claims the flood narrative as an essential myth, and uses this myth as a framing device for this current body of paintings.

In Bahen’s reading of the narrative, The Ark is a vessel containing a precarious cargo of dichotomies. Stocked with opposites and doubles this body of work is a reflection of things we take with us, the waste, the beauty and the violence of change accumulated as we move through the world. Exploring the physicality of this idea, Bahen has constructed and installed a large hull section of a tanker in the gallery, creating a sense of the paintings hanging in the belly of a vessel. This fragment of man’s built environment is an acknowledgement of the multiplicitous nature of violence and brutality and the metaphorical cracks of light that seep through. Bahen asks, “What is the nature of mankind and how does one hold onto the ‘better angels of our nature’ amid loss and suffering?”

Within the paintings of Ark, we find images of burning daytime fires, packs of dogs rummaging through piles of discarded scraps, murmurations of starlings, and the banal and subtle beauty of Bahen’s probing focus on landscape.

Bahen’s surface is a deep, rich, heavily impastoed field of marks, expressive in their struggle to assert themselves, knuckling for position. Firmly planted within the historical trajectory of painting, the paintings of Ark have an affiliation and connection to those essential myths and metaphors. Bahen cites the writing of Cormac McCarthy, Joseph Conrad, and Joseph Boyden as well as the work of Anselm Kiefer, John Scott and Phillip Guston as models for engaging with ideas loss and renewal.

For Bahen, the presence of loss and suffering is a constant in life and the question of how one carries that accumulation is the central question. Having seen it wound, scar, cripple and crush, but also having seen it carried admirably with tenderness and empathy Bahen acknowledges that pain and suffering are going to occur, that violence is an inevitable agent in the world.

So the ark is a human story, building on the idea that each story if properly told can be all stories.

Matt Bahen (b. 1979) is a Canadian Artist based in Toronto, Ontario. Bahen has exhibited and been reviewed both nationally and internationally with notable recent exhibitions including a solo exhibition, Gravity’s Faith at the Maclaren Art Centre in Canada. Bahen is represented in Toronto by LE Gallery and in New York City by Claire Oliver Gallery.